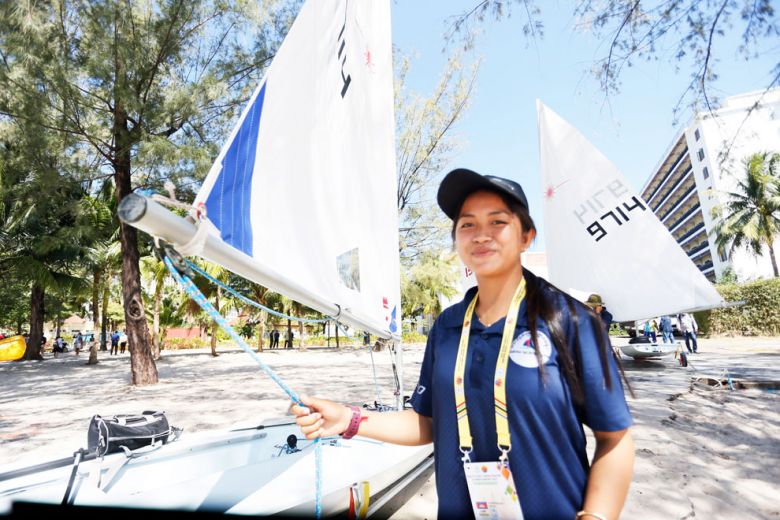 As the first ever female sailor to have represented the Kingdom at an international sailing competition, pint-sized Tith Somsoriya is making a statement of intent for Cambodian women.

The petite 17-year-old was the only Cambodian female sailor in action at the Southeast Asian Sailing Championship 2021 in Sihanoukville last December.

Not bad for someone who could not even swim when she took up the sport five years ago.

“My parents were worried that I would drown and were not happy that I wanted to take up sailing,” said Somsoriya.

While she herself was unsure of the road ahead, her inability to swim did not stop her from taking the plunge.

“I was nervous but decided to try it anyway using a life jacket. I learnt swimming at the same time I was sailing,” she said.

She added that it took a good one year before she could swim with confidence in the sea.

Somsoriya was also given plenty of encouragement by her sister to not give up on her dreams of taking up the sport competitively.

Growing up on the Ream Naval Base, was smitten by the sport when she saw the men trying the sport back in 2016. It was early days for sailing in Cambodia, with the national association of the sport barely a year old.

Being the only female international in Sihanoukville has not dampened her love for the sport and her attempts to get more Cambodian girls taking up the sport.

“I have been trying to convince my friends to take up sailing but they are all still afraid. They are still reluctant to give it a try,” she lamented.

Somsoriya, who is currently training under the watchful eye of Vin Kao Veasna, the pioneer of sailing in Cambodia, said her friends’ fears were similar to what she went through earlier.

“The sails are more than four metres in height and I myself am short, it is imposing,” said Somsoriya, who stands only 1.53m (five feet) .

Despite her diminutive stature, Somsoriya is standing tall as a pioneer for Cambodia women sailors in the international arena.

And having conquered the waves, she has cleared the way for more Cambodian women to excel not only in sailing, but sport in general.